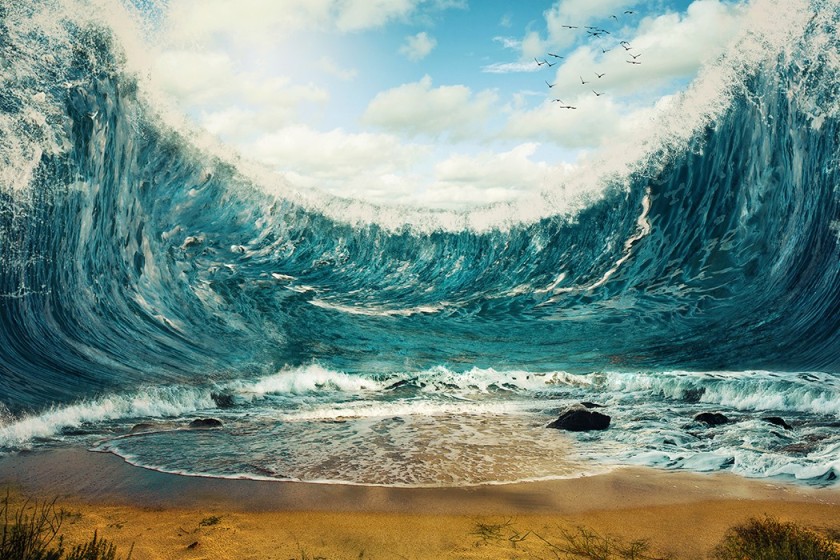 How do you explain miracles?  If someone were to come up to you and ask, what is a miracle?, Could you answer them?  Aren’t miracles scientifically impossible?  Those who trust just their five senses would agree with this.  What is the difference between the realm of miracles and the realm of science?

The realm of miracles would lean toward the religious worldviews. For example, in Christianity, if God exists (which I believe He does), then miracles are possible. This is to say that if there is a God who can act, then there can be acts of God.  The arguments used against the believability of miracles prove too much. Given that God exists, if we have good evidence that miracles occurred there is no reason we should not believe it.

What I would like to do in this post is show present a case for miracles on the understanding that there is a supernatural God that exists.  Once it is shown that the theistic God exists, using the law of noncontradiction, we can see that, of necessity, any non-theistic view of reality or worldview, must be false. This means an incredible amount of work has already been done in showing that Christianity is true. Atheism, agnosticism, Hinduism, Buddhism, Wicca, and any other non-theistic worldview must be false regarding their views of God.

This leaves us with Christianity, Judaism and Islam and any other unnamed theistic worldview as possible contenders for the one true view of reality. How can we adjudicate between these views?  If one of the above belief systems were confirmed by miracles then we should have reason to believe its truth claims..

With the way that our culture is going, the question of miracles is becoming more and more an issue.  Miracles?  No doubt many in our society would say, “Surely you cannot seriously believe miracles are possible.” Why not? As Dr. Norman Geisler says, if there’s a God who can act, then miracles are possible. C. S. Lewis wrote, “If we admit God must we admit miracles? Indeed, indeed, you have no security against it” (C. S. Lewis, Miracles (1974): 169).

A Quick Look at the Critics

Others will protest, “But extraordinary claims require extraordinary evidence.” So I have no reason to believe miracles have actually occurred.” What exactly is meant by extraordinary here?

If on the other hand, one means by “extraordinary” a particular quantity of evidence, who makes the decision on how much? That is rather arbitrary. Moreover, we have a vast amount of evidence showing the existence of God, the reliability of the Bible (as we shall see in the coming weeks), and so forth.

Still others, following the 18th century thinker, David Hume, will say, “The evidence for the     regular is always greater than that for the rare. Since  miracles are rare, a wise man should never believe in miracles.”

Did you know that many non-believers accept many rare events.  For example, the “Big Bang” cannot be repeated, yet we have solid scientific evidence that a punctiliar event in cosmological history happened, that proved to be the greatest miracle of all. That miracle was that the universe exploded into being out of nothing a finite time ago in the past.  Many believe that life spontaneously arose from non life, something that has never been observed or proven nor repeated.

So arguments against the possibility of miracles simply prove too much. We have solid reasons to conclude that God exists. Hence if we have good reasons and evidence to be a miracle actually occurred, then the wise thing to do is to believe it.

Miracles are Acts of God to Confirm a Message from God.

If miracles happen, then we can agree that they are a special type of unusual event. They stem from a divine supernatural power, are immediate, lasting, and point people to God. Their primary purpose is to provide a divine fingerprint confirming God’s message. What is that message?  That message is that God is there and He is never silent.

Our Usage of the Word “Miracle”: An Illustration from the Past

Like many words in the English language, we use the term miracle quite loosely to describe everything from sporting events, to the birth of babies, to Jesus walking on the water. Since the theistic God (of the Bible) exists, we know miracles are possible, but what precisely counts as a miracle?

It was bitterly cold Thursday afternoon on January 15, 2009 when a flight bound for Charlotte NC hit a flock of birds shortly after takeoff from New York City. Captain “Sully” Sullenberger III safely landed the disabled plane in the Hudson River. Then New York Governor David Patterson said, “We had a miracle on 34th Street. I believe now we have had a miracle on the Hudson.”

Anomalies: Purely physical events that may be considered “freaks of nature.”  Scientists used to consider the ability of a bumblebee to fly as a “freak of nature.”

Magic (i.e., Slight of hand/the hand is quicker than the eye): This kind of event is a human         controlled physical event like those of a trained stage performer doing illusionary tricks.

Psychosomatic events: These kinds of events are the “mind over matter” kind of events where one tricks themselves into believing something actually happened. This occurs frequently with the television “faith healers.”

Satanic counterfeit signs:  These kinds of events are derived from limited preternatural power that is meant to lead people away from God.  What does Scripture say?

Here are what I call the “dirty dozen” practices directly linked to the demonic power mentioned in the Bible are:

What is the Difference Between Miracles and Magic?

Seeing that there are different ways of looking at the phenomena often confused for a bona fide miracle, the following chart will show the differences between miracles and magic:

Providential events:  These events are often mistaken for miracles. They are naturally experienced and may have a supernatural timing for God’s purposes. An example of this would be the fog that occurred on D-Day at the Battle of Normandy. The fog provide cover for the Allies should be considered providential.

Actual miracles:  Miraculous events that stem from divine power that are immediate, lasting, and point to the glory of God. A miracle is an act done by a supernatural God pointing to Himself that He is there, and He is never silent. Many times are showing His love, and care in our lives.

A miracle therefore is  a very specific kind of unusual event which would not apply to sporting events, televangelists, or even landing airplanes on rivers. Rather a miracle proves a divine fingerprint most often used to confirm God’s message.

Biblical miracles generally occurred during the times surrounding Moses, Elijah, Elisha, and Jesus and the Apostles, that is the times God was providing new revelation and confirming as authentic His message. As the Apostle John wrote in his gospel,

“Now Jesus performed many other miraculous signs in the presence of the disciples, which are not recorded in this book. But these are recorded so that you may believe that Jesus is the Christ, the Son of God, and that by believing you may’ve life in His name” (John 20:30-31).

Miracles are not for show or entertainment. They are relatively rare. Biblically speaking, their primary purpose is to confirm God’s message. You might be wondering, “why do we not see more miracles?” Think of it from the perspective of the rarity of miracles. If miracles occurred on a regular basis they would no longer be miracles, would they? That is why they are called miracles.
__________________________________

Rob is a blogger, writer and public speaker with a love for equipping believers using apologetics, sharing the truth of Christ with the lost, and openly welcomes questions and objections from those that are genuinely seeking truth.