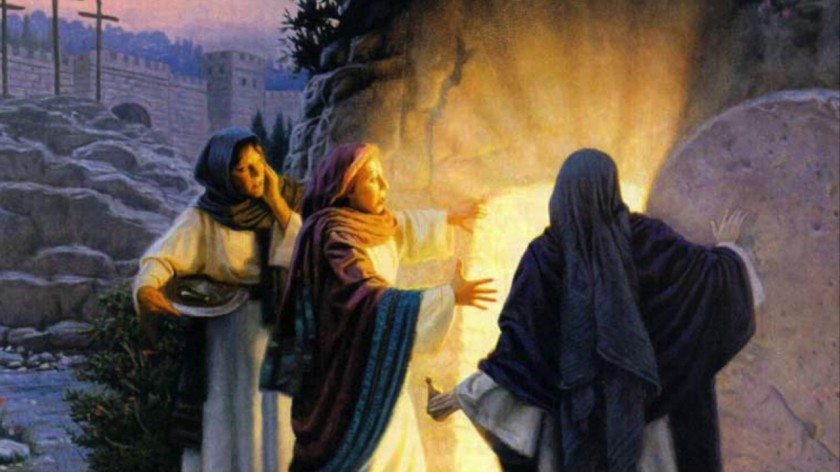 In our series on what happened at the tomb, we come to the third installment, to answer the question of what was seen at the tomb and whether the gospel writers are in conflict what they record.  As you recall, this series was sourced in a series of emails I received a few years ago.

More specifically the challenge for this post has to do with what was seen with the removal of the stone from the tomb of Jesus. The question that this post will be answering is whether or not there are any contradictions about what was seen by the women at Jesus’ tomb regarding the stone and other features mentioned in the texts.  As will be the case in post, my approach will be to set up the objection by describing what the writers wrote in their gospels, and then respond to the alleged objection.[1]

Let’s Look at the Objection.

When we look at the full picture of this challenge from our skeptical inquisitor, Matthew’s gospel records for us that there was an earthquake, an angel rolling away the stone, and trembling guards watching this happen (28:2-4). Mark’s, Luke’s, and John’s gospels record for us that the stone had already been rolled back (Mark 16:2-4; Luke 24:1-2; John 20:1-2).

The only difference between John and the other two gospel writers is that John uses language that the “stone had already been taken away“ (20:1,2).   The question in this  objection, is that since Mark, Luke and John record that the stone was already rolled away, and Matthew does not. So if Matthew does not record the same thing as the other gospel writers, then there must be a problem with Matthew’s gospel.  Is this true?

A Response to This Challenge

First off, there is no problem.  The only problem is found in the objector’s lack of understanding of how each of the gospel writers were allowed to keep their personalities in their writing and had the freedom to record what the Spirit of God had guided them to write (2 Peter 1:20-21).  Again, the inspiration that came to the writers of Scripture was not 100% dynamic dictation.[2]  The writers personalities were totally in tact.

This being said, we know that Mark, Luke and John all agree that the stone was already rolled away before the women got to the tomb.  Remember they saw the stone rolled away as they were arriving at the tomb site. So, what’s the deal with Matthew, why does he not say the same thing?

Really Matthew is not in conflict with the other gospel writers.  In fact if you look at the passage the first thing we see is that Matthew provides with WHAT HAPPENED TO THE STONE.  There was an earthquake, “for an angel of the Lord descended from heaven, came and rolled back the stone, and sat on it.”[3]  What Matthew does is he gives us more information than the others, which is usually an indicator of authenticity rather than being in-genuine.[4]

So if the one making the objection is so inclined to challenge Matthew, they need to take a couple things into consideration for their objection to be honest.  The first is that Matthew is not bound to record the exactly the same things as the other gospel writers. To our benefit, he gives us more information and he jumps from the earthquake and trembling guards to the angel speaking to the women.[5]  And he was writing this without collaborating with the other gospel writers to see what they wrote; and it was under the leading of the Holy Spirit. This brings me to the second point.

Second, we have a little enemy attestation in this same chapter [6]. Where is this testimony from the enemy?  It is right in the same chapter, in Matthew 28,

11While they were going, behold, some of the guard went into the city and told the chief priests all that had taken place. 12And when they had assembled with the elders and taken counsel, they gave a sufficient sum of money to the soldiers 13and said, “Tell people, ‘His disciples came by night and stole him away while we were asleep.’ 14And if this comes to the governor’s ears, we will satisfy him and keep you out of trouble.” 15So they took the money and did as they were directed. And this story has been spread among the Jews to this day. (Matthew 28:11-15)

So we have more details from one of the gospel writers, confirming for us how the stone was rolled away.  Also, we have some rough tough Roman guards who fell like dead men during the supernatural event of an earthquake.  Also let’s not forget that an angel, which could whip up on an entire Roman legion, came down and rolled the stone away.

So as you can see, and read, using some good hermeneutics, that there is no contradictions in the texts concerning THIS PART of the account at Jesus’ tomb.  If there are any problems, they are with the person seeking to cherry pick looking for alleged contradictions by ignoring the context of the accounts, as they fall together.

If you have lost track of these entries, please refer to the previous entries in this series. After reading this and the other postings in this series, let me know what you think.

Other Posts Up to This Point in the Series

Do the Gospel Accounts Contradict Who Went to Jesus’ Grave?
Are there contradictions in the time the women went to the tomb?

[1] Whenever there is an objection in Scripture, where there is a question of consistency of the reports, I believe this approach is best. That approach is to look at all the passages in the historical narrative, and then piece them together like pieces in a puzzle to get the full picture.  Also as reminder, the objections in this series came to me from the keyboard of an atheist, who responded to my website at the time.

[2] Rob Bradshaw notes that Dictation Theory means that God dictated the Scriptures to the writers and that the men who penned the Scriptures acted like typewriters taking the dictation while God spoke.  In other words, God took over by totally overriding their minds and personalities – hit the right keys. This theory has been consistently rejected over the centuries and no respected theologian or church leader has ever held it.  For more on the subject of inspiration you may go to Rob Bradshaw’s Biblical Studies page found at http://www.biblicalstudies.org.uk/article_spirit.html.

[4] Remember in the first post on this series I mentioned this tool for interpretation looking for what is called undesigned coincidences in the gospel writers.  An undesigned coincidence (so-named by J. J. Blunt and first discovered by William Paley) occurs when one account of an event leaves out a bit of information which is filled in, often quite incidentally, by a different account, which helps to answer some natural questions raised by the first. As an argument for the historical veracity of the gospels, the case is at its strongest when taken as a cumulative whole: In other words, it’s death by a thousand mosquito bites.  If you would like to  see more on the subject of undesigned coincidences in the New Testament, let me recommend following this link.

[5] There is a problem for those who might want to argue for Markan priority.  Matthew does not need Mark to write his gospel narrative.

[6] Habermas and Licona have a great section on this in their book, The Case for the Resurrection of Jesus.  Enemy attestation simply stated, is when there is “testimony affirming an event or a saying is given by a source who does not sympathize with the person, message, or cause that profits from the account we have an indication of authenticity” (Gary R. Habermas and Michael R. Licona, The Case of the Resurrection of Jesus, Grand Rapids: Kregel Publications, 2004: 37,38).

Rob is a blogger, writer and public speaker on a mission to equip the believer to think and articulate what they believe and to communicate the message of the gospel to a confused culture in a confused, chaotic, “brave new world.”

He is available to come and speak to your church, college club, or group. Find out what people are saying.  If you would like to support this ministry with a one time or monthly gift, you can do that by clicking here

If you would like to book Rob for a speaking event, you can do so by emailing him at realissueapologetics@yahoo.com    If you have other questions about apologetics or doing apologetics, or if you are looking for apologetics resources, contact our ministry by email.