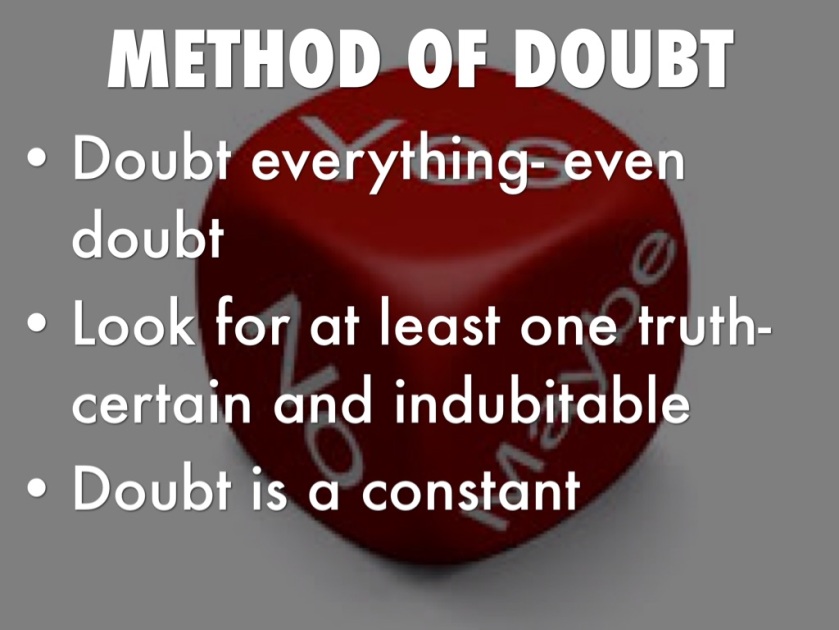 If you happened upon one of my recent posts on How to Recognize and Dismantle Self-Defeating Statements, this post will sound a little familiar. That is because in my podcast on the same subject and in the talk I recently gave on this subject, I mentioned that each of the self defeating statements could be addressed in their own blog posting.  This one is one of those objections to absolute truth.

What is the objection? That objection is the claim that one should “doubt everything that claims to be true.”

This objection of being skeptical about everything is rooted and grounded in  philosophy of uncertainty. In fact it is not really all that new in that it has its roots began in ancient times before Christ. In a not so ancient time, like the eighteenth century, we would find a “champion” of this form of skepticism in the likes of David Hume (1711-1776).

David Hume was a Scottish philosopher who was one of the preeminent thinkers during the Enlightenment. Hume claimed that all knowledge of “mattes of fact” or any knowledge not grounded in meanings of terms, is based upon our senses. Within the discipline of religious thought, Hume became famous for his arguments that belief in miracles was irrational because the evidence of a past experience will always outweigh the testimony in favor of miracles.[1]

So suffice it to say, this challenge, to the Christian worldview, of doubting everything falls within the context of our believing in God, and the existence of anything supernatural. Someone who is skeptical of anything supernatural would be “naturally” indecisive and seek to rip apart a Christian’s views by “throwing down this objection.  So is there an answer to “doubt everything that claims to be true.”  In fact there is. Let’s move forward.

Understanding and Dismantling the ‘Doubt’ Bomb

Skepticism says that we need to hold off on the decision of following Jesus Christ. This threat to Christianity for indecision is really not too difficult to answer for three reasons.
The first thing we need to understand is it is impossible to be skeptical about everything. To be skeptical about everything means that we would have to be skeptical of our own skepticism.  This is because when we turn the claim of doubting everything, our doubting is included in our doubting.  Make sense. That does not sound too comforting does it?

Thirdly, Jesus Christ combatted skepticism during His ministry. After His resurrection, He addressed His disciples’ doubts by showing His pierced hands and feet for examination (See Luke 24:37-39 and John 20:26-29). Jesus further reduced their skepticism by eating a piece of broiled fish with them (Luke 24:42).

So having this understanding of skepticism in our modern day, the next time someone tells you that you should doubt everything that claims to be true, ask them this question: “Should I doubt that too?” One cannot doubt everything without being forced to doubt their own doubt.

[1] Allow me to point you to C. Stephen Evans’ book, Pocket Dictionary of Apologetics & Philosophy, and check out the entries on agnosticism, skepticism and David Hume.

Be sure to ask about our Apologetics Boot Camps where we address these objections and a whole lot more to equip students and young adults to share the unchanging gospel in a rapidly changing culture in a confident and articulate manner. For more information email us at realissueapologetics@yahoo.com