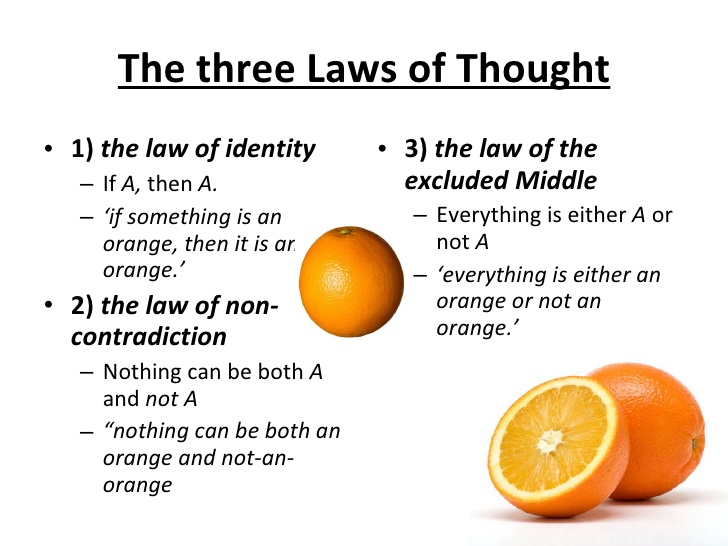 This week has been a busy week getting back in to the normal day in and day out schedule (not one that I desire but a necessary evil right now) after a wonderful weekend sharing with the folks at Iglesia Cristo La Roca. One of the questions that came up on the first night of the question and answer sessions had to do with the topic I shared that evening.  That topic was Are Truth and Morals Absolute or Relative?

We had two Question and Answer Sessions for the event and the first night’s Q & A brought forth an opening question that goes something along the lines of: “If you say that truth is that which corresponds to reality, and that it is absolute, how would respond to someone who disagrees with that by making the case for people living in different parts of the world experiencing different temperatures?”[1]

So what would be the answer to this?  Let’s first take a look at three basic, yet fundamental laws of logic.  From there, we will look at the objection from a few different insights.

Looking at the Laws of Logic

I am not sure how many of us remember any logic lessons from high school geometry or a basic logic class. Allow me to state that these laws are what are known as the classical laws of thought.

First there is the law of identity (for all A, A=A). This is the law of definition that is simply states that each thing is identical with itself (“whatever is, is”).

Next there is the law of non contradiction ~(A. ~A)[2].  This law states that contradictory statements cannot both be true in the same sense at the same time, e.g. the two propositions “A is B” and “A is not B” are mutually exclusive.

Each of these laws provide an objective referent, in that if we violate any of these laws, we are committing an error in logic, which is also known as a fallacy.   So now let’s move to the objection in question.

Stating and Answering the Objection.

I received this objection from a fellow co-worker and it was asked at the recent Apologetics Boot Camp, so as the questioner could understand how to answer it whenever one of his friends raised it.  Here is the objection again: “If you say that truth is that which corresponds to reality, and that it is absolute, how would respond to someone who disagrees with that by making the case for people living in different parts of the world experiencing different temperatures?”

Allow me to answer this with a couple of insights in light of the law of non contradiction. and then share with our response from the recent Q & A Apologetics Boot Camp.

Insight #1:  The laws of logic do not change given a particular scenario or situation. These laws are invisible, unchanging and absolute, so any variable outside them finds themselves evaluated by them.

Insight #2: To say that weather and time challenge the law of non contradiction misses the mark. When examining the weather, one has to take into considerations regions of the country and/or the world. Cold is cold in regions where it is cold. Hot is hot in regions where the tropical weather or the arid desert lands are experiencing hot weather.  Determining temperatures incorporate the laws of science.

Scientific deductions rely upon the laws of logic. So no matter if you live in the arid desert of the Sahara where it is hot all the time during the day or finding yourself at either the North or South Pole where its cold most of the time it is still absolute that the

With reference to time, this objection does not take into consideration time zones that are absolute standards for measuring time. The science of measuring time incorporates the laws of logic to make its deductions of where the line of demarcation lies from one time zone to another.

Here is our response to this objection.

Please let me know if you have any questions by emailing realissueapologetics@yahoo.com or post a comment below and we will more than happy to interact with you here.

[1] Not the exact question but you get the gist. Perhaps maybe you have heard this question in different forms as well.  I will have the question answer sessions up on my Youtube Channel very shortly, posting the whole sessions, and then breaking them down into short video responses.

[2] In writing a logical statement  the ~  is the symbol for negation.